This is why you should not listen and follow blindly successful CEO or businessman. We need to analyse what is the sacrifice of their success – is it more important than the success itself?

Darn, This Is Inconvenient: Apple Is Destroying The Planet To Maximize Profits 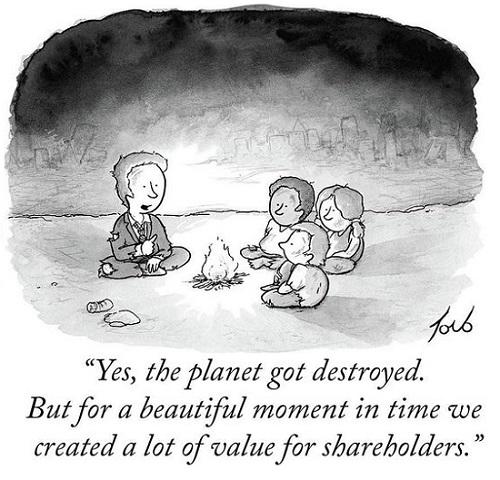 How do we describe the finding that the planet’s most widely-owned super-corporation is destroying the planet to maximize its smartphone sales and profits? Shall we start with “inconvenient?” Yes, we’re talking about Apple, famous for coercing customers to upgrade their Apple phones and other gadgets if not annually then every couple years, as the most effective way to maximize profits.

Unfortunately, smartphones require stripmining the planet, as described in this report, Smartphones Are Killing The Planet Faster Than Anyone Expected Researchers are sounding the alarm after an analysis showed that buying a new smartphone consumes as much energy as using an existing phone for an entire decade.

Smartphones are particularly insidious for a few reasons. With a two-year average life cycle, they’re more or less disposable. The problem is that building a new smartphone–and specifically, mining the rare materials inside them–represents 85% to 95% of the device’s total CO2 emissions for two years. That means buying one new phone takes as much energy as recharging and operating a smartphone for an entire decade.

despite the recycling programs run by Apple and others, “based on our research and other sources, currently less than 1% of smartphones are being recycled,” Lotfi Belkhir, the study’s lead author, tells me.

The researchers point out that mobile apps actually reinforce our need for these 24/7 servers in a self-perpetuating energy-hogging cycle. More phones require more servers. And with all this wireless information in the cloud, of course we’re going to buy more phones capable of running even better apps.

Google, Facebook, and Apple have all pledged to move to 100% renewable energy in their own operations. In fact, all of Apple’s servers are currently run on renewable power. “It’s encouraging,” says Belkhir of these early corporate efforts. “But I don’t think it’d move the needle at all.”

As consumers, we have more reason than ever to hesitate when it comes to our next shiny tech splurge. The bottom line is that we need to buy less, and engage less, for the health of this entire planet.

This is true not just for Apple, of course, but for Samsung and other manufacturers, but Apple has the rose-tinted “progressive” reputation, and so we should start with Apple, which has always been particularly aggressive in crippling the functionality of older products with a variety of tried and true tricks to force customers to buy a new device (sorry, Bucko, your old phone can’t handle OS X.yz so it’s now a useless brick).

It’s not just CO2–smartphone components demand the expansion of environmentally destructive mining for essentials such as lithium:

Climate Change’s Great Lithium Problem: The future of technology metal mining in South America and elsewhere could look eerily similar to centuries of colonial exploitation, dressed up as environmentalism: American highways could buzz with Teslas traveling between sprawling suburban rooftops and office parks decked out in solar panels, all premised on capitalist profiteering and disregard for indigenous rights.

What would happen to Apple’s gargantuan profits were it to design, build and market smartphones and other devices to last a decade or longer? We all know what would happen: sales and profits would fall off a cliff, and hundreds of billions of dollars in stock market “wealth” would vanish as Apple stock declined to align with much lower profits and the end of the “endless growth” story.

(Apple enthusiasts claim Apple TV and other services will replace profits from phones, but at this point that is speculation without much supporting evidence.)

The disastrous environmental, social and political consequences of maximizing sales and profits regardless of “externalities” is not just Apple’s problem–it’s the entire developed world’s problem. As for Apple’s vaunted “renewable power”–the alternative energy technologies are not actually renewables, they’re actually just “replaceables,” in analyst / author Nate Hagens’ succinct terminology; solar panels and wind turbines must be replaced every 20 years or so, if not earlier, and as a result their lifecycle costs are permanently high.

What looks “paid for” in year 19 suddenly becomes expensive in year 21.

I am currently Indonesian expatriate working in Singapore. I am currently working as security researcher in National University of Singapore. I write this blog to share to readers about my life principle on various aspects, like religion, politics, business, relationship, and technology. I am interested in alternative worldviews because I found that many things taught to us by establishments are not true and harmful. My dream is to become self-sufficient in food and energy. Hopefully, someday I can have my own fruit garden and my own power plant and able to sell my electricity to power company. I hope readers enjoy my blog.
View all posts by edwinlt →
This entry was posted in Economy, Environment, Ethics, Technology and tagged Economy, Environment, Ethics, Technology. Bookmark the permalink.